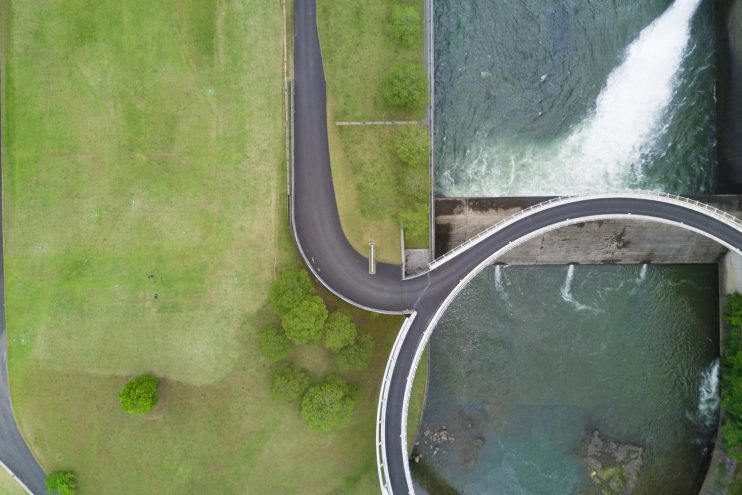 Floods are among Earth’s most common and most destructive natural hazards. Floods occur when water overflows the land that is normally dry. Excessive rains can also lead to dams rapture or simple water overflow, which causes unwanted consequences for downstream settlements and unoptimized electricity production. Most floods take hours and even days to develop, giving residents and dam workers time to prepare. Other floods generate quickly and with little warning. These flash floods can be extremely dangerous, sweeping everything in their path. That is why it is vitally important to be able to predict such rainfall events.

The main task is to predict dam inflow in the next 3 hours from a given moment. This prediction will allow to:

In order to proceed with the task we are given the data that contains information about rainfall events that consist of a time series of precipitation, water levels on numerous bridges upstream the river flow, and information about dam inflow at a given moment. Time series data with intervals from 10 to 30 minutes (different for every data type like precipitation or water levels) is provided for every rainfall event.

We also can use precipitation data from sensors that are located on the surface of about 900 km2 near the river basin. The region is not square, it consists of two intersecting rectangles, you can see the scheme below. 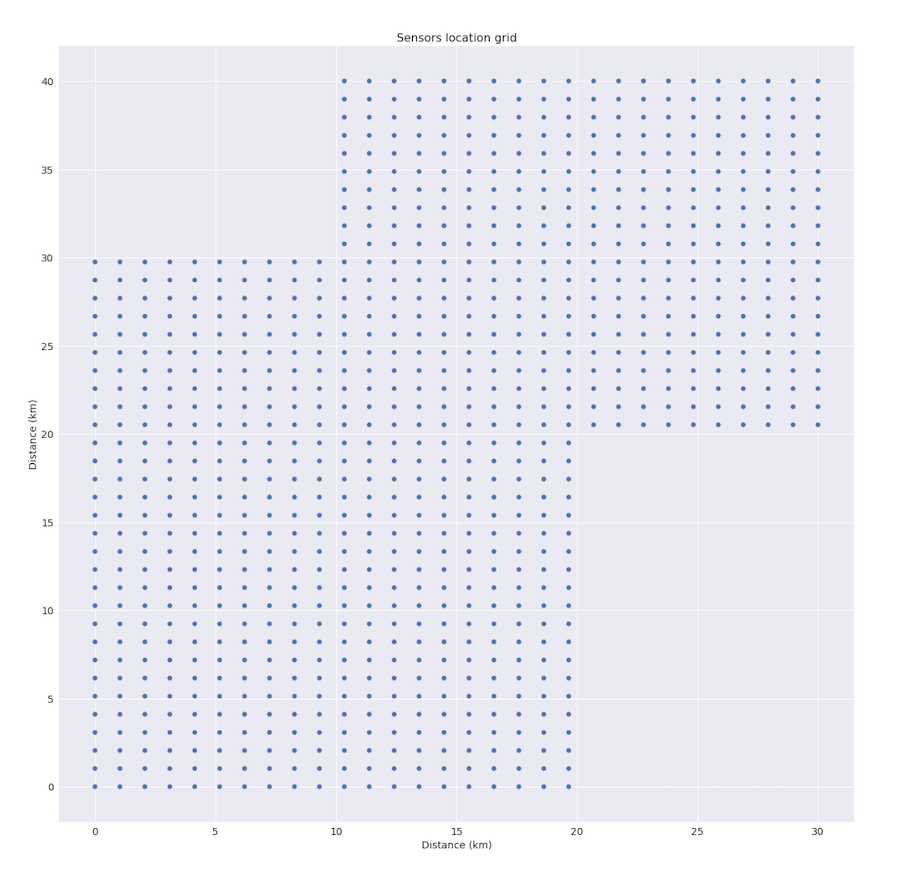 As it often happens in real life, some of the data about several bridges was missing. Some data could be missing randomly, but such situations are pretty rare. In total, available data contains about 20.000 data points for about 50 rain events.

It is worth mentioning that only several events could be marked as “extreme” because water flow during them exceeds average level pretty rapidly. An example is shown below. 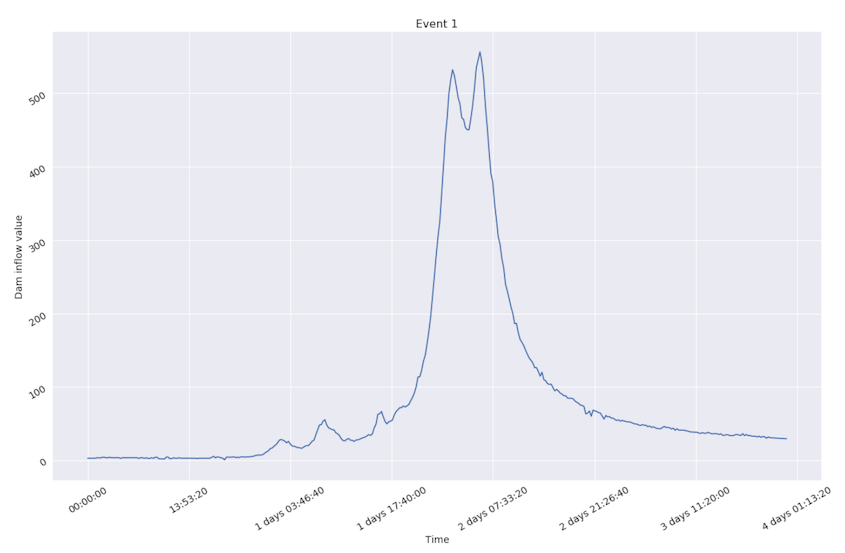 Nevertheless, the majority of events could be marked as non-extreme, because inflow value doesn’t change that fast. 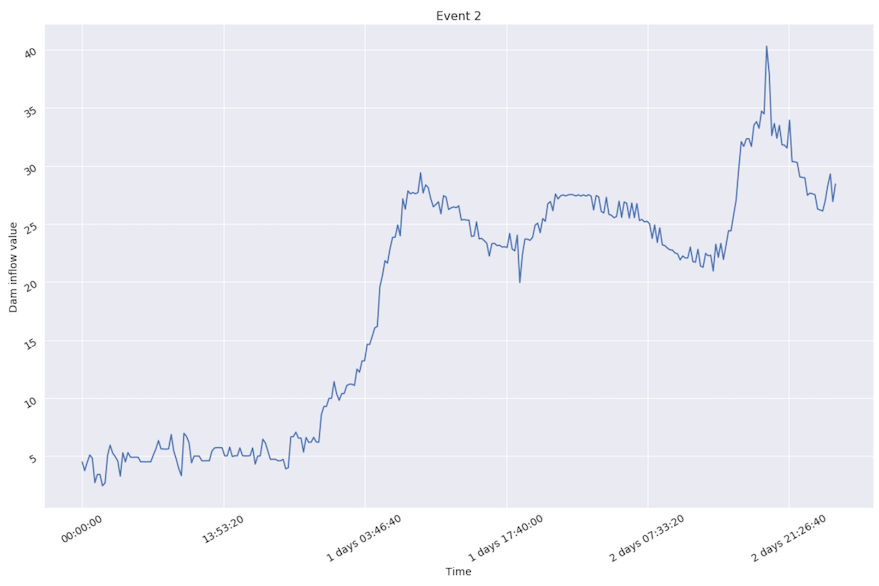 After data cleaning, adjustment, visualization, and basic analysis we come to the process of choosing a validation technique that aims to help mimic real world usage. In this project we use leave-one-out technique for each event – we train the model on every event except one and calculate error for each of them.

While choosing a model it is always necessary to define the optimization objective. Since it is a regression task (predicting real value of inflow for the future) we could use any error function from regression problem. Ideally, we should also define the losses for any situation like predicting too much or too little in any range of values. An alternative (that is definitely easier than the previous one) is to figure out, whether relative error is more important than absolute, for instance, if predicting 210 instead of 200 is equally bad as predicting 20 instead of 10. After answering the question we are done with task definition and can move further. Please note, that optimizing relative errors is also useful while training linear models. This type of error makes models avoid focusing on extreme values and removes biased prediction for low inflow values.

After experimenting with a big amount of features for linear models we got an idea of combining two types of models: one for small and medium inflow values (that could be predicted with small error by tree ensemble methods) and the other one based on linear model for predicting high inflow values by catching extreme changes in inflow. That is where multilevel modeling starts.

Training procedure for multilevel modeling could be implemented following the next steps:

Usage pipeline is shown on the graph below: 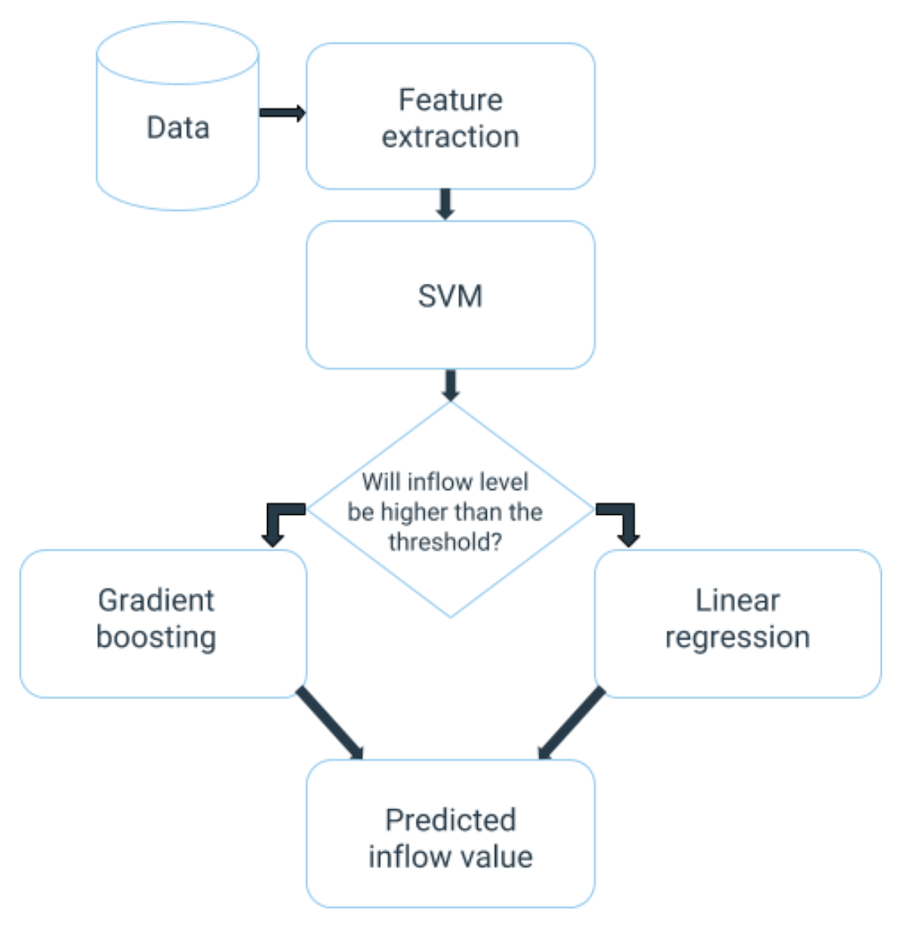 The main idea of our final approach is a two layer model with two “heads” that are responsible for inflow prediction. The first head is a linear regression part that is capable of predicting high inflow values events without similar experience in the past. This property of linear models makes them suitable for prediction of rapidly changing parts in rainfall events.

The other “head” of our final model is a gradient boosting regressor, that is a not straightforward model that is able to catch nonlinear dependencies in data. As a tradeoff, it requires more data and is not capable of predicting values above the maximum or below the minimum values that the model has already seen during the training phase. In our case, the model performed well for low inflow values prediction because of several reasons:

Comparing to the baseline model performance (blue line in figures), our final model (green line) lowered error almost twice. Visually, this two-headed model reacts to changes faster and, averagely, better (RMSE reduced from 21.12 to 10.87): green line is much closer to the target (red line) than the blue one.

Thanks to multilevel modeling approach our final model is capable of catching data peaks thanks to linear regression part and still performs well at low values of inflow thanks to gradient boosting. 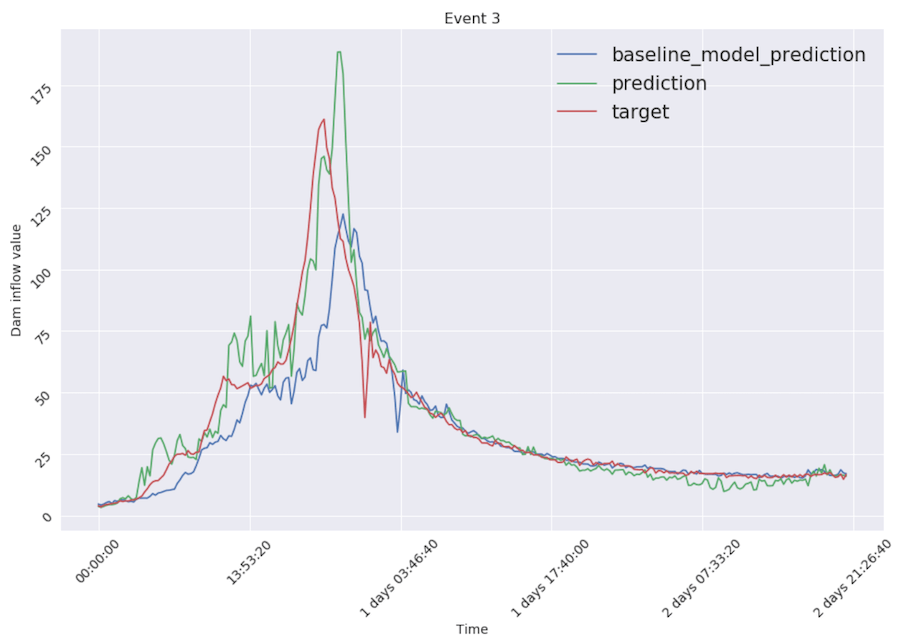 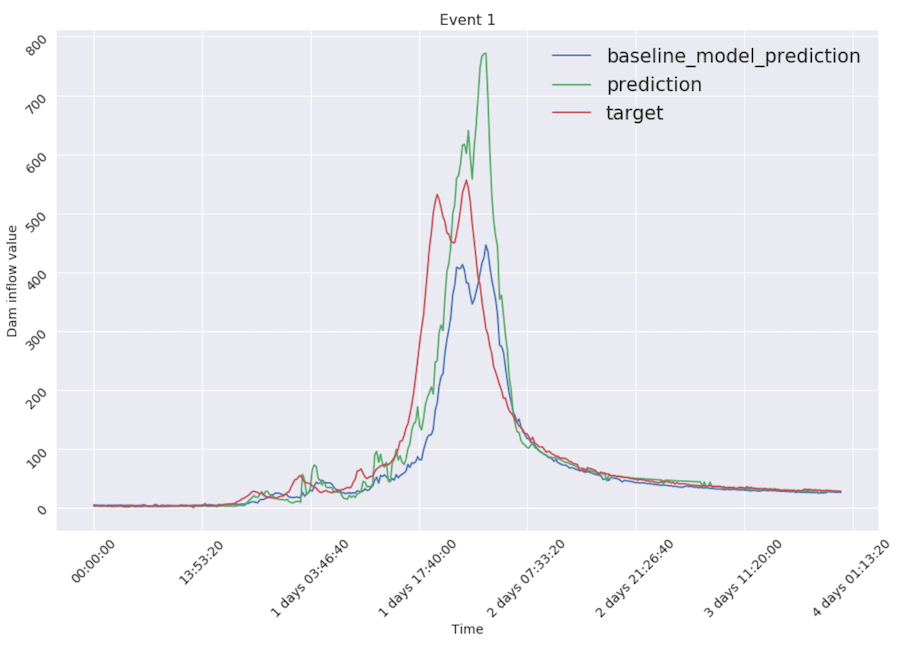 Work with InData Labs on Your Predictive Analytics Project

Schedule an intro consultation with our Machine Learning engineers to explore your idea and find out if we can help.